skip to main | skip to sidebar

After the debacle of the last top, I'm glad that this one came out so well.  A commenter suggested wearing it open over another shirt.  I hadn't thought of that but that might be the way to go until/if I make another one.  I will purchase more of the same fabric but I'm once bitten, twice shy.

Anyway, I will be participating in a wardrobe contest on patternreview.com.  After we came home from the car show last night I had an itch to sew.  I will be using 9 vintage patterns and 1 repro pattern.  One pattern I've used before and the rest are new to me.  As we are allowed to muslin, I've decided to start working on muslins for the tops.  I'm less concerned about fitting the skirts.  I chose Butterick 6927 as it seemed like the easiest to re-size at 11pm.  I used the Kenneth King method of using my sloper to compare to my pattern.  Based on the comparison, it looked like I only needed to add to the side seam allowance.  Luckily this pattern uses neckline gathers and released darts for shaping.  I didn't need really worry about bust points which I would have to if it had a bust dart.  I ended up taking out almost 2 1/2 inches at the bust during the fitting but the waist fit perfectly.  Because the sloper and pattern match looked good, I decided to cut into my good quilting cotton rather than using the plain muslin.

The only change I made other than the sizing issue was to bind the armholes as well.  I love this top and will re-make it not just for the contest but in other fabrics. 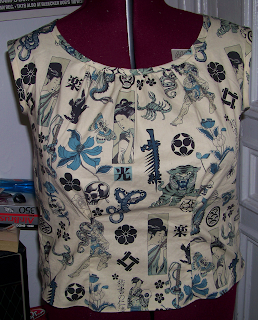 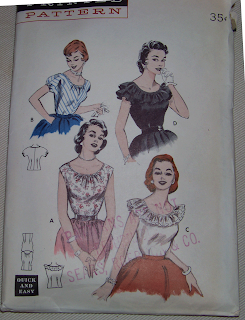 Posted by Sickofitcindy at 11:21 PM 5 comments: Links to this post 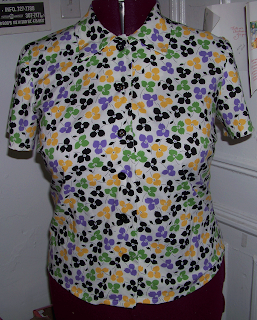 This blouse looks good. In fact it's one of the best blouses I've ever made. The collar is properly interfaced. The buttonholes look decent. The sleeves don't have too many puckers. It fits the dressform great. Unfortunately said dressform is dialed down as small as it can go. And I was this size... once. Not even that long ago relatively speaking. Sigh I had high hopes for this blouse as it was going so swimmingly. I love this print which is a deviation from my normal novelty/skulls/tattoo motif fabrics. I even took the darts out. Double sigh. Of course I trimmed the seam allowances next to nothing before I realized it didn't fit. Must get going hardcore with the Wii. Just in case, I will order more fabric. I'm not sure if I want to remake the same pattern. Is it cursed? Going forward I will pay more attention to the finished size. Or I will re-check my measurements.

Posted by Sickofitcindy at 2:06 AM No comments: Links to this post

60 Days of Summer (or swimsuits in any case) 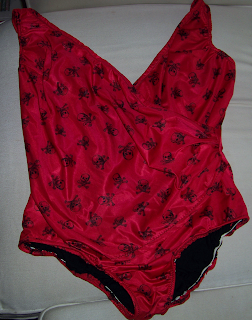 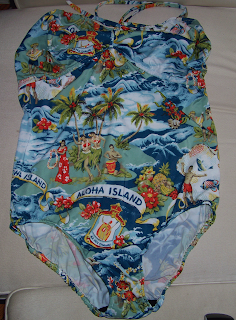 I guess I got over the swim suit phobia. After the success of my first one, I've made an additional two. Now I just need to get swimming before the summer ends! Both have been worn once so they pass the pool test. The red skull suit is more flattering as it offers more support in the boob area and I think looks more slenderizing. Though I do love the hula one too.

Posted by Sickofitcindy at 2:02 AM 2 comments: Links to this post 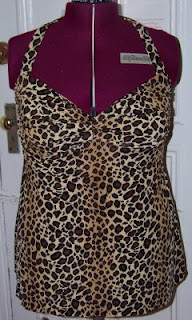 I bought a bunch fo stretch lycra about a year ago. I've finally bitten the bullet and made my first swimsuit. Now I don't know why I was so anxious about it. I thought the stretchy factor would make it complicated but I found it to be quite easy. I posted on Pattern Review for help and many people recommended Kwik Sew patterns for their ease. I can easily buy a suit but I really wanted a retro style one. I bought one from a repro site. It was cute but for some unfathomable reason, they only lined the front. It is wearable but I find it a little thin from the back.

The pro to using lycra is that it makes fitting easy. My measurements don't fit into the pattern's measurements 100% but the stretch factor takes that worry away. I'm officially hooked on making swimsuits!
Posted by Sickofitcindy at 6:19 PM No comments: Links to this post 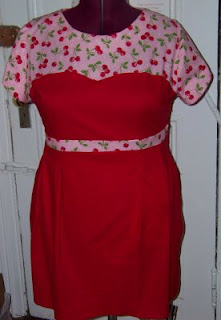 Normally I kind of let my patterns marinate in my stash until I get a burst of inspiration. I originally had purchased the solid red and cherry print fabric while on vacation in Florida with the intention of starting a vintage pattern- Advance 6675. However, to my sadness and dismay, despite the pattern still being in factory folds, the pattern DID NOT match the envelope or instructions! The initial plan was to use the red fabric for the bodice and the cherry print for the full skirt. Alas sometimes things go awry. So I made lemonade out of lemons, or rather, a Macaron. There haven't been too many reviews yet but the few that there are are favorable, as well as for the whole line.

I am very pleased how this pattern came out. Normally I can be a bit slap dash when it comes to my sewing. This time I actually took the time to press my seams when indicated and even interfaced the neck facings. I accidentally interfaced the contrast waist band. No harm done. I love this pattern and recommend it highly!
Posted by Sickofitcindy at 5:54 PM No comments: Links to this post

I promise to do better. I will try not to cop out so often and rely on my pattern review review widget. Promise.
Posted by Sickofitcindy at 5:53 PM No comments: Links to this post I wouldn't get anything done without my right hand, er, right paws

Places I Visit When I Should Be Working